Three Funny Folk Songs to Get You Through the Week 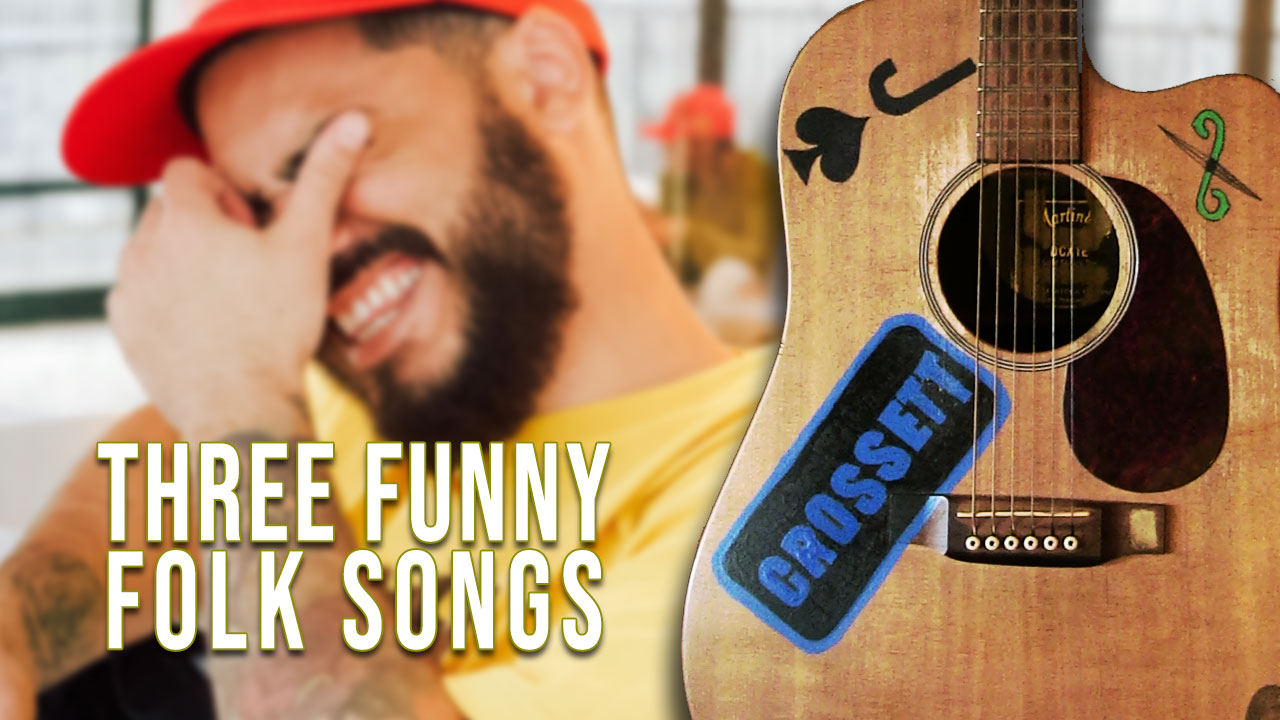 Three Funny Folk Songs to Get You Through the Week

There are a seemingly endless number of serious folk songs and ballads throughout history and that’s what it is most known for but there are just as many funny songs too!

People have always wanted to share their stories and songs are a great way to do that but us humans also need a good laugh now and then so funny folk songs have fit the bill for centuries.

Being a folk singer/songwriter myself, I love a good silly song… especially when it’s based on a true story.

Today I’m sharing three funny folk songs I wrote so if you’re looking for a good laugh, I hope one of these does the job.

Out of the three songs I have, this is the only one based on a true story. Paved roads were a really big deal back in the early 1900s. Especially if your town wasn’t known for much else. The town of Bothell, Washington had an energetic citizen named Gerhard Ericksen who was dedicated to making Bothell amazing. He led a project to get the roads paved so travelers would choose Bothell to drive through on their way to Seattle.

Ericksen succeeded in this and the whole town was proud of their new paved roads. Only Ericksen knew it could be better.

He noticed how many blackberry bushes there were along the sides of the road and he imagined if anyone was to stop and relieve themselves during a long drive, they could potentially get caught in the thistles causing pain and a bad name to Bothell.

Ericksen again jumped into action just like when he did to get the roads paved and wrote the Thistle Bill, a law which required the removal of all blackberry bushes and other thorny plants from the sides of the road so travelers could urinate in safety…

Listen to “Thistle Bill” on my album In Vacant Dates and Intentions on Spotify, Apple Music, Amazon Music and more.

It’s tough out there. With bills, college loan debt, transportation costs and groceries, no matter how hard you work you can always use a little bit extra cash.

This is the position our main character finds himself in the song “Nights and Weekends.” He tries to hide the fact that is having financial issues but there’s one person who knows everything… his mail lady.

You can’t hide anything from the post office and those who deliver your overdue bills. This time she has an offer for him he can’t refuse. One of the oldest jobs known to the human race.

This is a fictional tale of a man becoming a gigolo for middle aged ladies (and some men) around town and how he was finally able to get himself out of debt thanks to all this extra work.

Listen to “Nights and Weekends” on my album Gardener Hands on Spotify, Apple Music, Amazon Music and more.

Watch it all Burn from the Lake on Our inflatable sofa

Some songs are funny because they hit so close to home. Sometimes completely by accident.

I wrote “Watch it all Burn from the Lake on Our Inflatable Sofa” in 2019 after helping my wife make invitations to our wedding. We used a technique called shaving cream marble art which gave us a bunch of random designs.

One looked like an inflatable sofa floating on a lake with a volcano in the background.

This inspired me to write a post apocalyptic song about watching the world go to hell from the comfort of a floating inflatable sofa.

Listen to “Watch it all Burn from the Lake on Our Inflatable Sofa” on my album Life is For Taking Chances out 5/14/21 on Spotify, Apple Music, Amazon Music or YouTube Music.